Wizards of wordplay gather in Whanganui 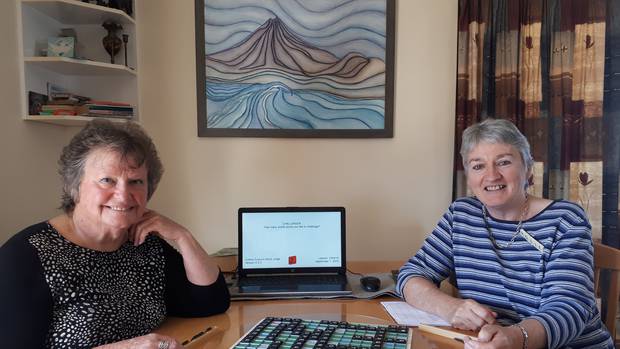 Lynne Butler (left) challenges WHS teacher Rosie Cleary to a game of Scrabble for fun before they meet each other in competition this weekend.
PHOTO / Jesse King

For one word in Scrabble, 302 points is more than adequate.

And adequate is the word Lynne Butler played when setting a New Zealand record in 2011.

It was the most points ever awarded for a seven-letter word when Butler blew her opponent off the board at St John's Club in Whanganui.

Butler said she played the word at the bottom left of the board from her view.

"When I was sorting through my rack I thought 'it would be nice if he played a d' and he did and I gasped. I was so excited I could hardly count," she said.

"I placed a,d,e and the q landed on the double letter. The points were multiplied by nine because it spread from one triple to the other, plus 50 for playing all my letters."

Butler will be looking to break her own record when the country's 24 best wizards of wordplay gather in Whanganui this weekend for the New Zealand Masters Tournament.

Butler is not only the 14th ranked competitor but also the director of the tournament, which last year received its first sponsor in Ryman Healthcare.

Fittingly, the tournament will be held in the atrium of the retirement village and rest home operator's Jane Winstone Retirement Village.

Butler said she always played Scrabble as a kid and then, more socially, as an adult.

"I was living in Australia and I was working with the national organiser of Scrabble Clubs of Australia, Rhonda Palmer," Butler said.

"She invited me around to her place one afternoon for a couple of games. I got there at one o'clock Saturday afternoon and I left at five o'clock Sunday morning."

That is not even the longest time Butler has spent playing Scrabble.

To celebrate the new millennium, Butler and Rosie Cleary (ranked 22 in the tournament) got dressed up and played Scrabble for 24 hours in New Plymouth.

Butler, Cleary and Andelina McLean (ranked 13) are three of 19 Whanganui Scrabble Club members who play at the Gonville Library every Monday.

Competitors will be visiting the River City from as far south as Dunedin and as far north as Whangārei.

The love of Scrabble has taken Butler all over the world, including to North America in 1985, where she met the inventor of the game, Alfred Mosher Butts.

"He thought we were all crazy. He never expected his game to go anywhere like it has," Butler said.

"To think, at that time, people would travel from Australia to Boston to play Scrabble."

The tournament begins at 8.30am this Saturday, Sunday and Monday, with play finishing at 6pm on all three days.

So if you already have a plan for this weekend, why not double up and head on down to Jane Winstone Retirement Village? You might even triple your fun.

This post is over a year old. Some of the information this contains may be outdated.

Please email the office if you think this information requires review.